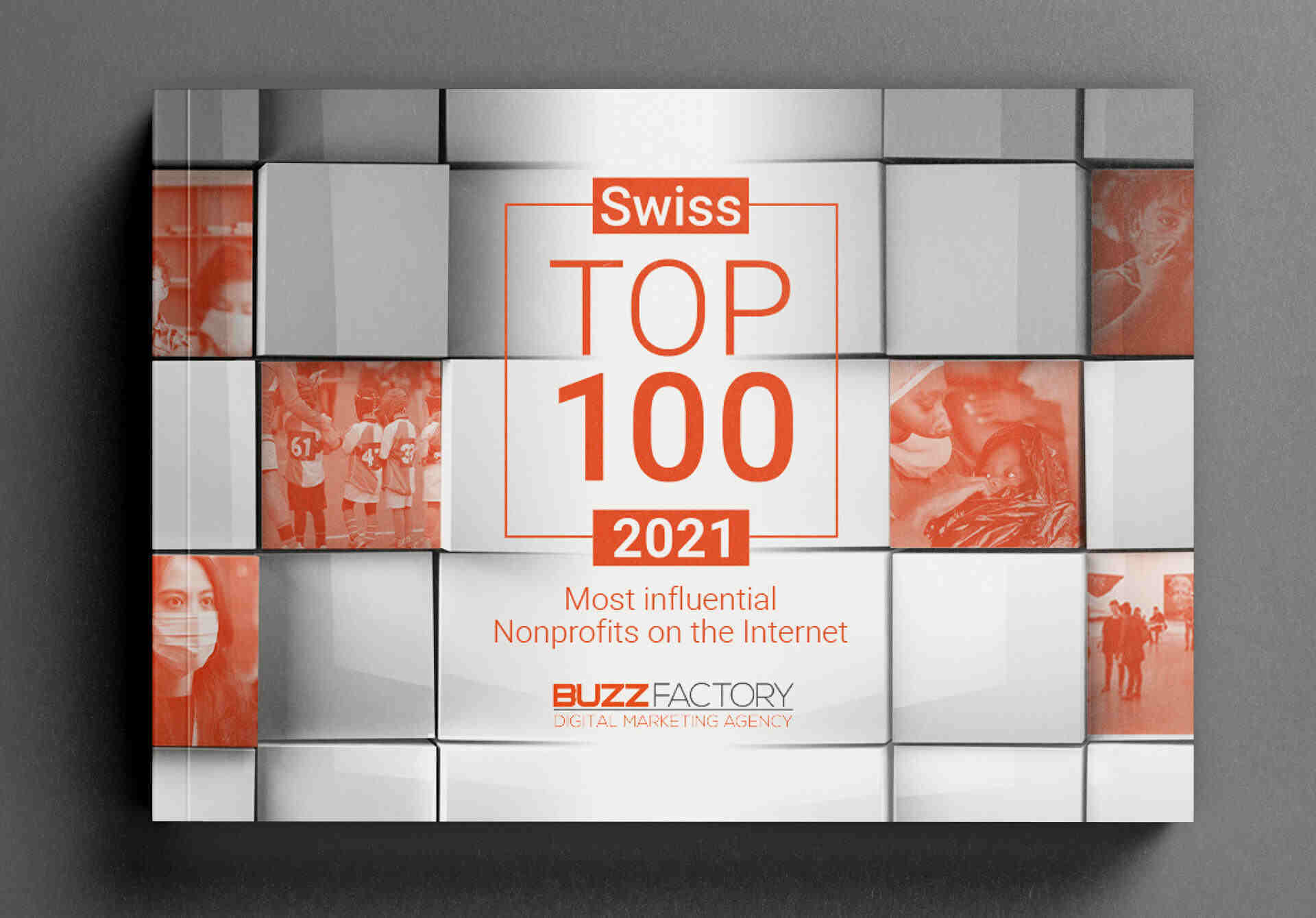 BUZZ FACTORY, Vevey, Switzerland, 16 August 2021 – Buzz Factory has launched a groundbreaking report on Switzerland’s Top 100 Nonprofit Organizations​ that shows how NGOs’ marketing strategies have evolved in response to the pandemic. Last year’s report was the first of its kind to use a data-based approach for determining the digital readiness of Swiss NGOs, and this year’s report provides even more data-backed insights into online trends affecting the nonprofit sector.

The report looks at key digital performance metrics to rank organizations in terms of their online presence. The final result, which the Swiss marketing firm has coined the “Buzz Factor”, is calculated using scores from the three most important indicators of an NGO’s online reach – Domain Authority (DA), Social Media Engagement, and E-reputation.

Based on these metrics, the report uncovers the ‘True and Fair’ positioning of more than 500 local and international nonprofits who have headquarters in Switzerland. It looks at data from Q1 2021 across multiple online platforms to reveal the current standing of these organizations, establish benchmarks for new and established charities, and draw insights from the leaders which other nonprofits can apply to succeed with their own digital strategies.

Last year’s edition of the Top 100 report was downloaded more than 2,000 times. This year’s report includes more valuable data and analysis, such as the analysis sections on the top 10 leaders in Domain Authority, Social Media Position and E-Reputation, the Top 20 Risers list and analysis, among others. This in-depth report is therefore a much-needed window into the Swiss nonprofit industry that organizations can leverage to improve their impact and reach online.

Because the report looks at data from Q1 2020 and Q1 2021 side-by-side, it is also the first comprehensive view of the real, measurable impact which COVID-19 has had on the nonprofit sector. The results show that major shifts have taken place in the areas of donor engagement, fundraising, and digital marketing, and it also discusses how organizations can adapt to these changes successfully. 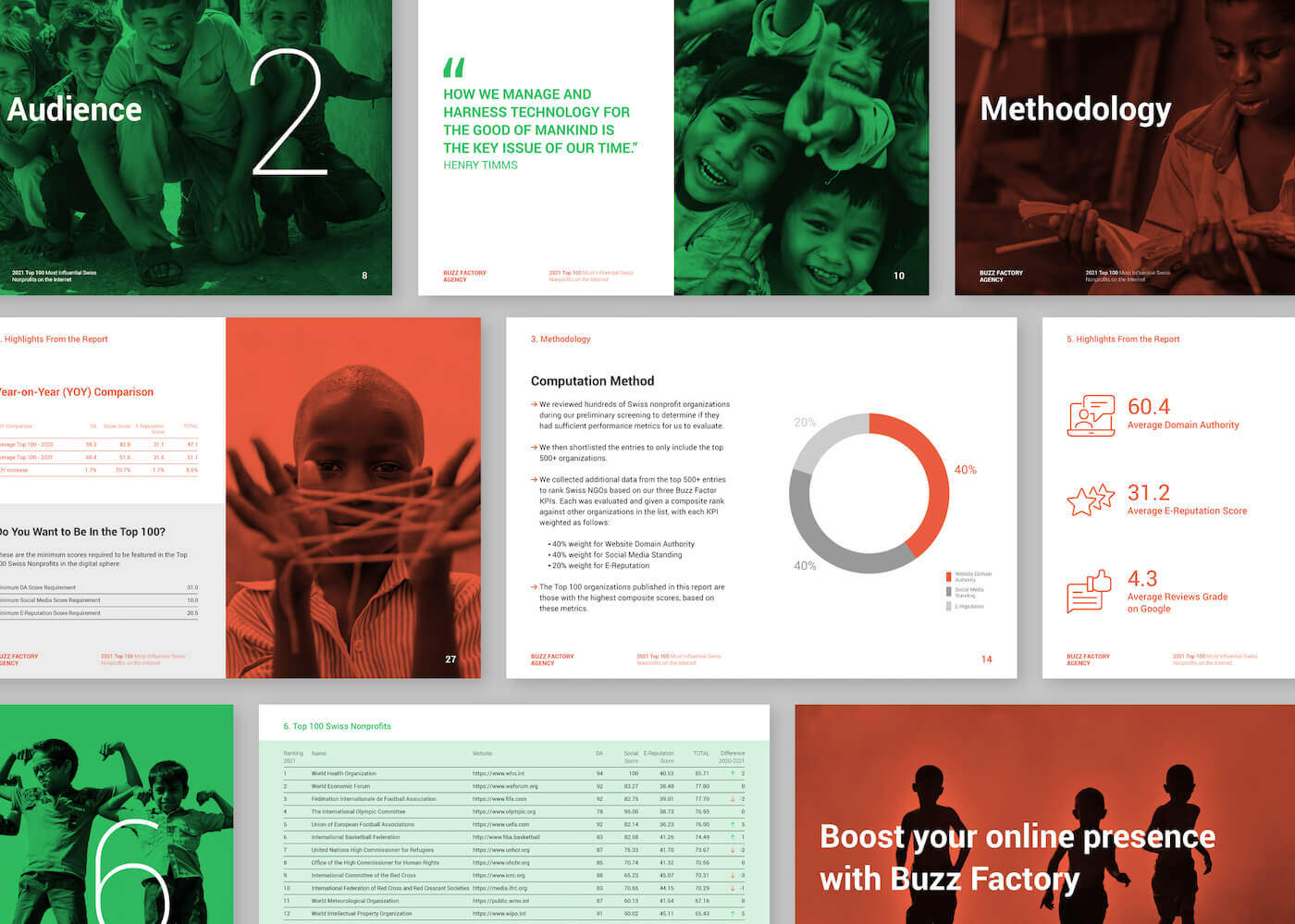 The factors which were used to determine the ranking – website authority, social media engagement metrics, and E-reputation – are ideal for showing changes and trends over time. They are unbiased data points, and only organizations who display ongoing quality and commitment with their digital marketing strategies will perform well across all areas.

The research contains easy-to-compare facts and figures, giving charity managers and NGO marketing heads the opportunity to see where the leaders are excelling, and discover areas where they can improve their own strategy. This will help them build a strong connection with their existing community and donors and reach broader audiences by establishing themselves as industry leaders in the digital space.

The report is intended to be a resource for nonprofits and private partners to use to inform their strategies in the post-pandemic world for 2021 and beyond. Its creators have committed to updating the list of Top 100 Swiss Nonprofits with new data and insights every year, so organisations can easily track trends in the industry and measure their own performance against the digital leaders.

Last year’s report already made waves in the nonprofit sector, by highlighting the key drivers of success for NGOs in the digital sphere and offering unprecedented insight into the current digital landscape for Swiss nonprofits. This year’s edition continues Buzz Factory’s ongoing research to give charitable organizations a valuable resource of digital best practices and benchmarks.

Buzz Factory is a leading digital marketing consulting agency based in Switzerland. The agency works with the world’s most ambitious charities with the goal of amplifying their impact and redefining the future. A one-stop digital solutions provider, the agency assists non-profit organizations in their fundraising and online marketing activities. Its strategy is results-driven and designed specifically for success in the nonprofit sector. Since October 2013, Buzz Factory has worked with more than 200 local and international nonprofits and businesses to increase sales, donations and improve their marketing methods. 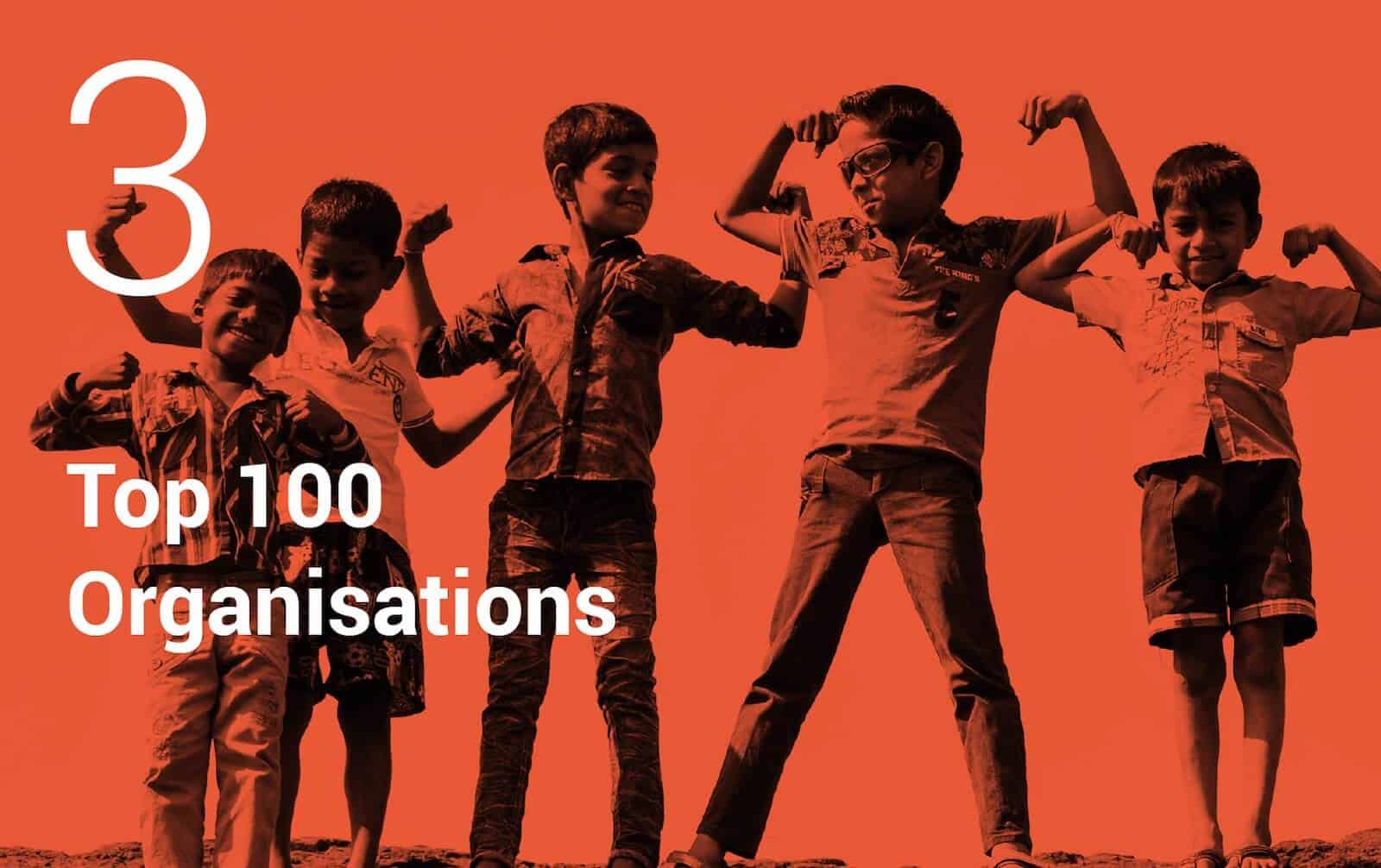 Based on digital metrics, this report uncovers the ‘True and Fair’ positioning of 450 local and international organisations headquartered in Switzerland. It contains the latest methods and techniques based on data gathered from 2020’s first quarter. The document reveals the current standings of nonprofit bodies, while turning out Benchmarks for new, emerging as well as struggling charities all around the world.

Containing verifiable facts and statistics of the leading nonprofit organisations, this ground-breaking report is a much-needed breakthrough in Swiss non-profit industry that could improve their course for good.

Using an unbiased methodology and transparent process more than 450 nonprofit profiles have been evaluated on their performance across leading social networks including Facebook and Instagram.

Nearing 300 organisations were shortlisted and further screened before making their way to the top 100 list.

Factors accounted for, such as website authority, social media engagement metrics, and user experience, tend to change with time, are unbiased, and favour none except those who display ongoing quality and commitment.

The research contains easy-to-compare facts and figures giving charity and NGO marketing heads the opportunity to calibrate their strategies with those of the leaders of this report. This builds a strong connection with their existing community and donors, whilst aligning themselves as industry-leaders to broader online audiences.

By comparing themselves with those in the list, nonprofits can take corrective measures to get noticed and be included in an ongoing, self-improving ‘competition’ of top-notch charities and NGOs.

In addition, the creators of the report are committed to annual updates, publishing the latest Top 100 List of Swiss Nonprofits every year, giving everyone a fair chance for inclusion. This analysis, due to ever-changing trends, affords an open competition for every Swiss nonprofit, as it only considers authentic and verifiable sources.

The report has already been making waves in the nonprofit circuits, highlighting some of the unexpected organisations that have made it to the list, and revealing which big names failed to make a real impression. With that being said, researchers and analysts of the report deserve merit for creating such a valuable ongoing resource for charitable causes.

Buzz Factory is a leading global digital marketing consulting agency based in Switzerland. We help the world’s most ambitious charities redefine the future. Since establishing in 2013, our agency has become well regarded in our industry due to a principled, transparent approach to search engine marketing. We work together with our clients as a team with the shared ambition to achieve extraordinary results, overcome competition and reshape the nonprofit industry. We complement our personalized and integrated experience with a vibrant ecosystem of digital innovators to deliver better, faster and more lasting results. Since October 2013, Buzz Factory has worked with over 200 companies and international nonprofit organisations to increase sales, donations and improve their marketing methods.

This website uses cookies to improve your experience while you navigate through the website. Out of these, the cookies that are categorized as necessary are stored on your browser as they are essential for the working of basic functionalities. We also use third-party cookies that help us analyze and understand user experience. These cookies will be stored in your browser only with your consent. You also have the option to opt-out of these cookies at anytime. But opting out of some of these cookies may affect your browsing experience.
Necessary Always Enabled
Necessary cookies are absolutely essential for the website to function properly. This category only includes cookies that ensures basic functionalities and security features of the website. These cookies do not store any personal information.
Non-necessary
Any cookies that may not be particularly necessary for the website to function and is used specifically to collect user personal data via analytics, ads, other embedded contents are termed as non-necessary cookies. It is mandatory to procure user consent prior to running these cookies on your website.
SAVE & ACCEPT
We are on WhatsApp